After the Revolution of 1917, the Church was persecuted by the state. Valuable and sacred things were removed, actually it was a case of open robbery. 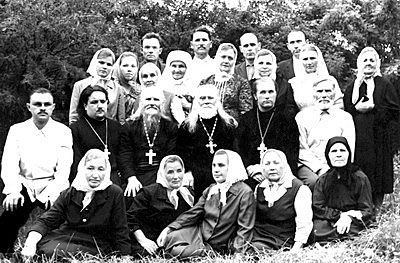 The clergymen of the Raifa monastery with parishioners.The end of the 19th c.

In 1918 the Raifa monastery was ravaged and closed. Unruly crowds of Red Guards burst into the churches, tore off precious frameworks from the icons, and took away valuable church-plates. Committing these blasphemies, they also smoked in the altars and sat on the communion tables. The believers were outraged by those actions and soon the peasants from the neighboring villages rebelled. The rebellion was suppressed, but the authorities had to yield and in 1919 they allowed services in one of the churches.

The monks, driven out of the monastery, had to settle in the neighboring villages, being in need of food and warm clothes. But in spite of all these persecutions, they continued to provide all kinds of religious rites: christenings, weddings, and funeral services. They set many people aright by the example of their own pious lives.

Finally the authorities decided to close the monastery and to drive away all the monks. In 1928 all services were strictly forbidden. But the monks who hid in the neighboring villages continued to come to the monastery, praying there secretly. On January 27, 1930, on the eve of the patrons’ saints day in the church honoring the Saint Fathers Slain in Raifa and Sinai, seven hieromonks started the vespers. Some monks from the closed monasteries of Kazan and Svijazhsk joined them.

The authorities used this event to accuse the participants of breaking the orders which had closed the monastery. The next morning, when the liturgy was over, most of the people who participated were arrested and taken to Kazan. Only a few managed to escape. During the next 20 days those arrested were examined and tortured. On February 2, they were found guilty in court and hieromonks, Josef, Sergy, Barlaam, Job, Antony, lay brother Peter, and two peasants from the village of Belo-Bezzvodnoje, Basily Griaznov and Stepan Abramov, were sentenced to be shot. Forty other monks and laymen were exiled to concentration camps.

For 45 days the poor convicts suffered all kinds of torture and humiliation. Secretly on the day of Annunciation (April 7) they were executed. The place of their burial is still unknown. From 1930 to 1954 the territory of the monastery became a part of the GULAG. How many people suffered and died there is still to be discovered.
In 1954 a colony for juvenile offenders was opened in the monastery. Later it was reorganized into a “special technical school”. The monastery buildings were not properly maintained and rapidly declined. The school started to erect its own buildings. 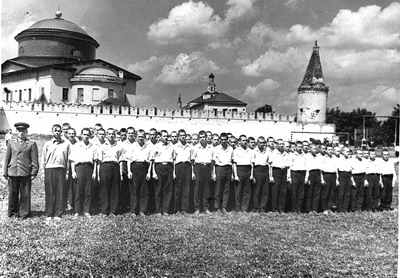