In the end of 1990, Igumen Vsevolod, dean of St. Peter and Paul church in village Gary in the Zelenodolsk region, together with a group of clergymen, got a permission to visit the “special technical school” located at Raifa monastery. It was a horrible sight: the walls, towers and most of the churches were half destroyed. The church honoring Our Lady of Georgia had been turned into a club. In the Holy Trinity church there was a metal-work shop where the vibration was so strong that many cracks appeared in the walls. Igumen Vsevolod started petitions to return the monastery to the believers. He gathered all the documents needed and sent them to the government. The petition was considered and in January 1991 permission was given to open a church on the monastery grounds. But that was not enough – it was necessary to move the school and to completely clear all the premises. In 1991 the Zelenodolsk city executive committee considered the question of Raifa and did everythingit could to refuse it. But the courageous and diplomatic position of Father Vsevolod and the support of the director of the School of Vladimir Ivanivich Chernov helped to get a positive decision from the authorities. 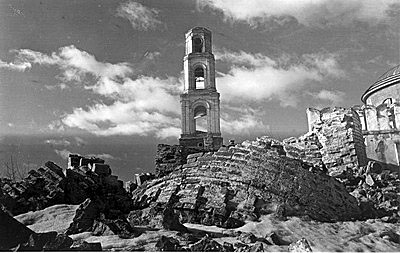 In 1991 with the blessing of Most Reverend Father in God Anastasy, the Archbishop of Kazan and Zelenodolsk, the restoration of the Raifa monastery began. Nearly all churches of the Kazan eparchy, including many enterprises, organizations and common people, took part in this noble undertaking.
One can see now the marble placques in the monastery’s central gates commemorating all of the benefactors. It was very difficult to restore the monastery at this time of economic crisis and disorganization in our country. Even finding building materials and technical supplies was an extremely dificult task. With no financial help from the state, it may be plainly stated that the restoration of the monastery became a common cause of our people.

Archimandrite Vsevolod became the vicegerent of the monastery. Being an experienced clergyman and a good organizer, he chose the first monks and lay brothers and took the lead in the very difficult task of restoration. It was decided to resume church services in the ancient monastery as soon as possible. As early as June 23rd, Archbishop Anastasy lead the first liturgy in the temporary church building. The archbishop brought the thing most sacred for our monastery from Kazan – the icon of Our Lady of Georgia. A public prayer was held in the presence of many believers with the consecration of the water and of all the monastery grounds on the square between the churches. 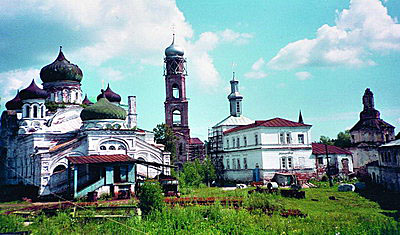 The start of the restoration works. 1991